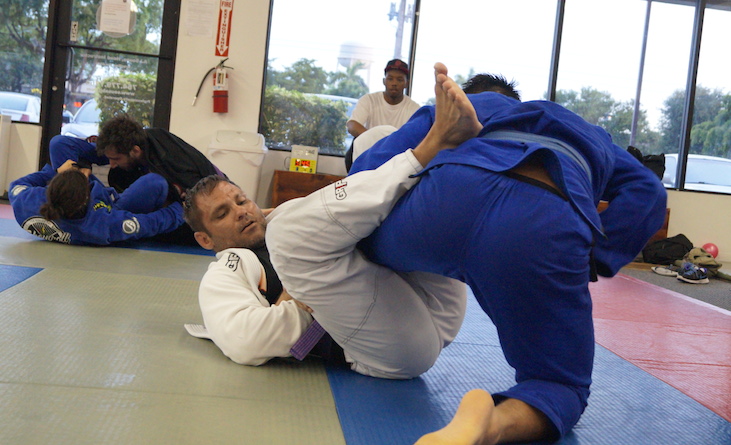 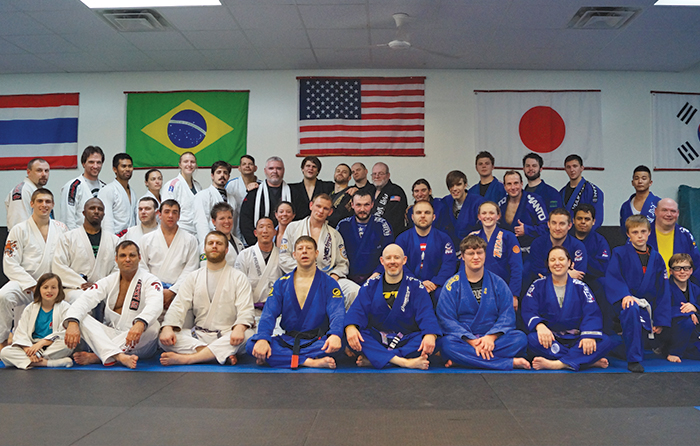 What is Brazilian Jiu-Jitsu?

Brazilian Jiu-Jitsu (BJJ) is a unique martial art that focuses on grappling and ground fighting. Rather than using punches and kicks from a standing position, BJJ practitioners utilize throws, trips, and sweeps to bring an opponent to the ground, where they have a variety of chokes and joint locks to bring an end to the altercation. Brazilian Jiu-Jitsu has its roots in Japanese Jiu-Jitsu and Judo. Japanese Jiu-Jitsu migrated to Brazil in the early 1900’s, where it was learned and modified by the now-famous Gracie family. Central to this philosophy of combat that the Gracies helped develop is the idea that a larger opponent’s advantages (reach and strength) can be nullified if he is taken to the ground. Thus, leverage and technique are much more important in the art of Brazilian Jiu-Jitsu than size and strength. Today BJJ has exploded in popularity all over the world, thanks to the efforts of Brazilian families like the Gracies and their cousins, the Machados. Brazilian Jiu-Jitsu can be seen in films (Red Belt), in Mixed Martial Arts (MMA), BJJ tournaments around the world, and in dojos in nearly every large city.

For a more comprehensive history of the art, please refer to the following post on the weblog “The BJJ Way”: http://thebjjway.com/the-masters/history-of-jiu-jitsu-part-1-before-the-gracies/.

What is MAGIC Brazilian Jiu-Jitsu?

MAGIC Brazilian Jiu-Jitsu is a BJJ and submission grappling school located in East Lansing, MI. The school is headed by coach and Machado student Matthew Linsemier. MAGIC BJJ also has advanced students training with experience in Greco-Roman and Freestyle wrestling, as well as other traditional martial arts such as Tang Soo Do and Tae Kwon Do. MAGIC BJJ affiliates with and is overseen by Ryan Fiorenzi and Tyrone Gooden, both Machado BJJ black belts from East West Martial Arts in Canton, MI. Ryan Fiorenzi was the first BJJ black belt in Michigan, and trains directly under Rigan Machado. Both Ryan and Tyrone provide additional training for MAGIC students, and offer students opportunities for promotion in Machado BJJ. Is Training in Brazilian Jiu-Jitsu Safe? Training in Brazilian Jiu-Jitsu is very safe, sometimes even safer than training in other martial arts. Since traditional BJJ training does not incorporate strikes, BJJ students have much less chance of incurring blunt trauma than students studying karate, Tae Kwon Do, or boxing. In addition, sparring (called “rolling” in BJJ) is made safer by giving practitioners the ability to “tap out” (tap the mat or their partner) to indicate their surrender to a submission technique before the technique causes actual damage. Instructors at MAGIC BJJ place a priority on student safety above all else. MAGIC BJJ students train under the Machado Creed – “Leave your ego at the door”. Participants at MAGIC BJJ work to create a culture of discipline and respect, where although the training may be tough, no one strives to prove their dominance by hurting other students. Students are taught to apply BJJ techniques slowly and with control, whether in drilling or live rolling, leaving their partners time to tap out to avoid injury. Also, students understand that no matter how long they have been training, everybody taps out sometimes, and risking injury to avoid “losing” a friendly rolling session is not an effective way to keep from getting injured or to further one’s knowledge of BJJ.

Do I Need to be in Shape Before I Start Training in BJJ?

Brazilian Jiu-Jitsu is an excellent form of exercise. Anyone who has wrestled before can attest that grappling provides aerobic, anaerobic, and strength training benefits to an athlete. Most new BJJ students are surprised at how tired they are after their first few sessions, and how difficult it can be at first to roll for more than a few minutes at a time. That being said, for most people, there is no need to get in shape before joining a BJJ class. Often, just doing BJJ a few times a week is all the exercise a participant needs to improve their fitness and their BJJ game. Some students do choose to perform extra conditioning to get in shape for tournaments or further improve their endurance on the mat. But for the average BJJ student, consistent practice is all that is needed to stay in shape and improve your technique.

Can I Earn Rank in BJJ at MAGIC BJJ?

Students at MAGIC BJJ have the opportunity to be ranked in Brazilian Jiu-Jitsu through the Machado system. Ranking in BJJ proceeds as follows: white belt, blue belt, purple belt, brown belt, and black belt. Often stripes are awarded (up to four) between each belt to denote excellent performance on the mat and progression toward the next colored belt. It can sometimes take a few years between each belt color, and up to ten or more years to earn a BJJ black belt, so MAGIC BJJ students are encouraged to focus on improving their technique and enjoying their training, with the understanding that the rank will come when they are ready.

What Do I Need to Get Started Training at MAGIC BJJ?

MAGIC BJJ teaches traditional Brazilian Jiu-Jitsu in a gi (jacket and pants, as in judo or karate) , and once a new student decides that BJJ is for him or her, then the student should look into the purchase of a gi. Currently MAGIC BJJ does not sell gis, but many current students at MAGIC BJJ can direct the new student as to where to purchase an affordable uniform. Otherwise, students should arrive for their first class in loose fitting exercise clothing, such as shorts or track pants and t-shirt or rash guard. Men should wear an athletic supporter and cup, and all students should have a mouth guard. Students will train either barefoot or in wrestling shoes, but no street shoes are allowed on the mat. Other than this basic equipment, new students at MAGIC BJJ should bring a good attitude, a willingness to learn, and be ready to sweat and have fun!